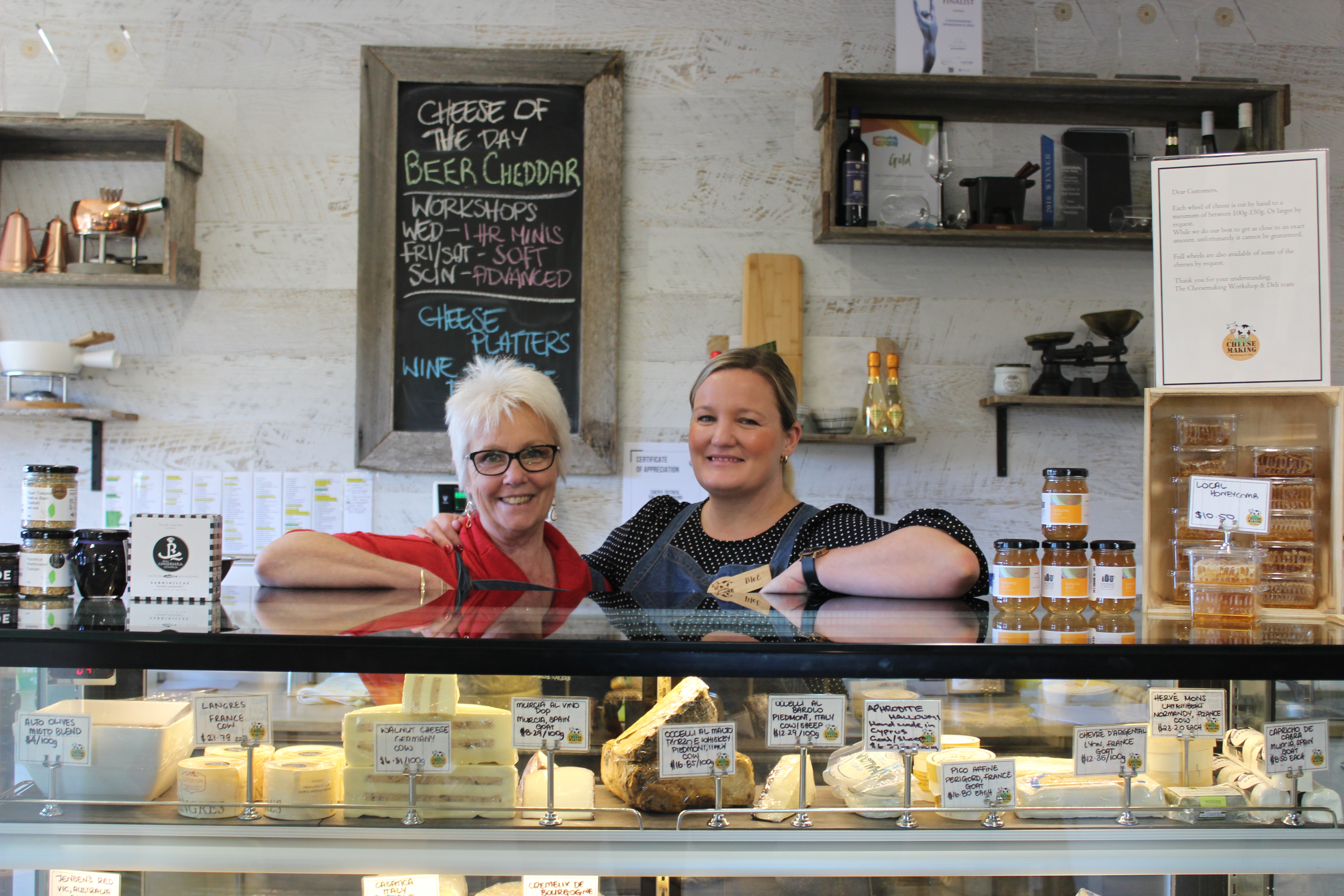 Seek out The Cheese Making Workshop for everything cheese including an impressively stocked deli of local and international cheeses, homewares, cookbooks and gifts. Join a cheese making workshop or simple enjoy a cheese platter and wine on the sunny deck overlooking the rolling hills of Coffs Harbour.

The dynamos behind The Cheese Making Workshop are mother daughter duo Lyndall Dykes and Melanie Browne. Their enthusiasm and love of everything cheese is infectious. Lyndall has long been involved in the Coffs’ food scene, having launched one of the first health food stores, The Nut House in 1977. With a passion for cheese, Lyndall commenced cheese making workshops at her home kitchen in 2009 and later joined by daughter Mel expanded the business to its current location, which also boasts an extensive deli and retail space. As Chief Cheesemonger, Mel is well versed in what’s in season and can help curate your perfect cheese plate.

With a rotating range of over 300 cheeses from across Australia and the globe including delicious and oozy cheeses from France, Italy, Switzerland and the United Kingdom you’re bound to discover something new.

Visitors are invited to try before they buy, “Taste this Beemster Gaskaas Gouda from Holland, made from the first Spring Milk. Only 1,000 wheels are exported outside Holland and of the 20 that reached Australian shores, 5 wheels were sold here at the Deli” says Mel proudly.

Mel says the current trend is for “raw milk cheeses” and they also stock lactose free cheeses in the deli.

Retail Business with everything Cheese

Featuring a cornucopia of cheese products; from artisan cheeses, to cookbooks and cheeseboards you’ll discover everything you ever needed to satisfy your cheese cravings at The Cheese Making Workshop. Owner Lyndall is also a published author; pick up a copy of her latest release The Cheesemaking Workshop a book lovingly devoted to cheese, offering a practical, hands-on guide to cheese making for home cooks.

Teaching the Art of Cheese Making

Learn the art of cheese making from this passionate and professional team; you’ll become an expert home cheese maker in no time. Lyndall skilfully commands the room during her cheese making workshops. The cheese making process is surprisingly simple and cost effective; you’ll be wondering why you didn’t start making your own cheeses and yoghurts earlier? It’s Lyndall’s mission to get people thinking about food and taking responsibility for the food they consume. Passionate about local produce, Lyndall says in Coffs Harbour “we are blessed with such diversity of produce. From cool climate veggies from Dorrigo, to the lush grazing pastures for dairy farmers to produce milk to make our cheese, to the ocean where we indulge in the freshest seafood.”

Cheese Platters with Wine on the Balcony

Even if you’re just passing through Coffs Harbour, swing by for a cheese and wine flight. These delicious cheese boards feature 4 incredible cheeses curated by the Cheesemonger and perfectly paired with 4 wines for just $25. The carefully measured 30ml pours ensure you can still drive if you’re midway on your road trip. Enjoy on the sunny verandah or arrange a takeaway platter to savour in Coffs beautiful great outdoors.